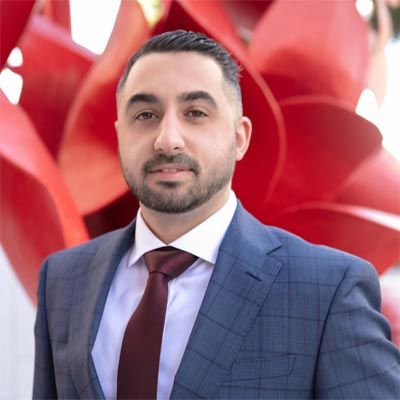 Mr. Jacobson takes pride in providing clients with first-rate legal services through vigorous and dedicated representation. Mr. Jacobson has successfully litigated over 100 breach of warranty cases against Chrysler, General Motors, Jaguar/Land Rover, Ford, BMW, Hyundai and other manufactures. He is no stranger to “David and Goliath” like battles continues to fight when most lawyers stop.

Mr. Jacobson was educated at the University of California, Los Angeles where he was awarded a Bachelor of History and Political in 2013. Mr. Jacobson earned a degree of Juris Doctor from Loyola Law School, Los Angeles while receiving numerous accolades and awards. Mr. Jacobson further received training at one of Los Angeles’ top consumer protection lemon law firms. Mr. Jacobson is licensed to practice law in all of California’s state courts and the United States District Court, Central, Eastern, Western, and Southern District.

JORDAN NAZER

Read More
From day one they were professional and made me feel at ease. They went above and beyond my expectations. I would highly recommend them to anyone and can’t thank them enough for all they’ve done for me.
JAIME BATTISTA

Read More
The 247 Lemon Law team has been amazing. They helped me so much when I was hit by a teenager a few months ago. They are quick to respond and truly had my best interest. I highly recommend them.
EARL HAWTHORNE

Read More
I would recommend this law firm to everyone. They were very helpful and very efficient. If I have a problem again in the future I would definitely come back here.
BELLA GRISSON

Read More
Would definitely recommend 247 Lemon. My claim was resolved in the best possible manner!
BRITNEY ROBINSON

Read More
My experience with 247 lemon was the best lawyer experience I have ever had , they are an amazing law firm that really cares about their clients.
JACOB ROSEN

Read More
Thank you for being so great to work with. It is hard to find lawyers that are honest and so down to earth yet have top of the line knowledge. It has been great working with you.
CAROL SILVA

Read More
Met with 247 lemon law and they started to work right away. Supplied me with all the information needed to proceed with my case. I would have gotten screwed by the insurance companies if not for him. I had never been involved in a lawsuit before but they took the time and made it palatable.
JORDAN BROWN

Read More
I’m so happy with the results that 248 Lemon obtained for me. They were always available to answer my questions, and kept me informed of how the accident investigation and legal progress was going. I had talked with other lawyers before going to Rio Law Group, and there was something about them that didn’t seem honest. But Rio Law Group was different than them. Thank you.
Previous
Next

The information on this website was written as advertising material and is intended for general information purposes only. Nothing on this site should be taken as legal advice for any individual case or situation. This information is not intended to create, and receipt or viewing does not constitute, an paralegal-client relationship.